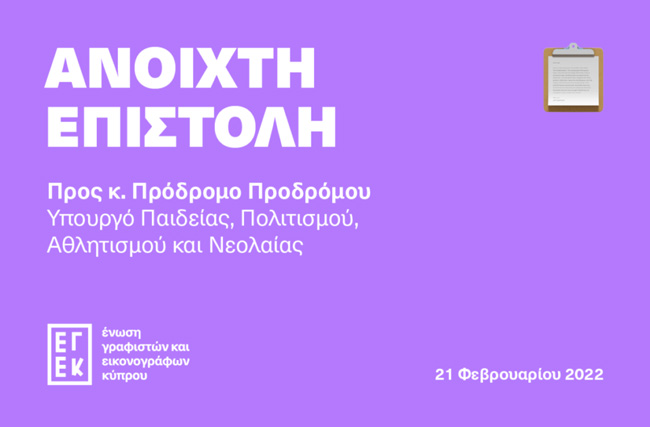 To: Minister of Education, Culture, Youth and Sports,
Mr. Prodromos Prodromou
Subject: Organization chart of the new Ministry of Culture

The Cyprus Association of Graphic Designers and Illustrators (CAGDI) expresses its disagreement and disappointment once again regarding the handling of matters concerning culture and the evolution of the art profession by the Ministry, this time, in relation to the composition of the services of the Ministry of Culture.
According to a publication by the newspaper “Kathimerini” regarding the Organization Chart of the new Ministry of Culture, the informal composition of the following Directorates is as follows:

It is with great regret that we realise that a vital, to the society and the economy, department of applied arts, as is Visual Communication (Graphic Design, Illustration, Digital Communication and all the interconnected branches), has not been included in the organization chart, neither under the Directorates mentioned above, nor in future plans, while at the same time we observe that you intend to include, at least in the future, departments such as Architecture, Byzantine and Ecclesiastical Heritage and the Modern and Contemporary Cultural Heritage.

The six areas included in the Directorate of Cultural Creation are not represented by the entire spectrum of Arts and Culture, and therefore it cannot be guaranteed that the individuality and importance of each art form will be considered in the general operation of each department in the Ministry of Culture. It is unacceptable that, in a democracy, such discriminations should occur in areas related to culture. The branches of applied arts related to Visual Communication, such as Graphic Design and Illustration, are a professional cultural force, because they are important culture-producing media.

CAGDI has repeatedly fought for the integration of the Visual Communication sector in all state systems (e.g. Social Insurance, Artist Status, etc.), unfortunately without success to this day, when very often the Ministries themselves express their pride for the importance of these sectors, through their actions. One such example is the recent pitch launched by the Ministry of Tourism for the new visual identity of the “I Love Cyprus” campaign. It is, unfortunate, to say the least, to “selectively” recognize the importance and use of the industry when these professionals are an integral part in the creation of culture, on multiple levels and especially when knowing, that their recognition and putting their talent and expertise to good use can only contribute positively to the society and economy of the island.

It is inconceivable that in today’s modern times, an entire professional sector is ignored. As a result, both the people who are engaged in the profession, as well as the artistic quality of the work produced are affected, along with whatever consequence this implies for the society and culture in general.

Following the events that unfold, and in our effort to stay ahead of the new composition of the Ministry of Culture, with this letter we aim to open a constructive public debate, in the hopes that our requests will be heard.